I run a TETRA UHF gateway here in Sydney for anyone in the amateur community to use. You can talk to others around the globe both on TETRA and Echolink via the gateway.

VK2CJC-L covers the Sydney CBD, Cremorne, Mosman, Neutral Bay, North Sydney plus parts of surrounding suburbs. It works as far south as the airport, as far north as Terrey Hills, and as far west as Haberfield.

The gateway transmits at a maximum of 10 watts, utilising an omni-directional antenna mounted 12 meters above the ground. The site has a clear view of the south, east and south west over the CBD.

Below are computer-generated maps (from ve2dbe’s mobile online mapping tool) showing expected coverage from the gateway with the receiving radio located 1 meter above the ground. 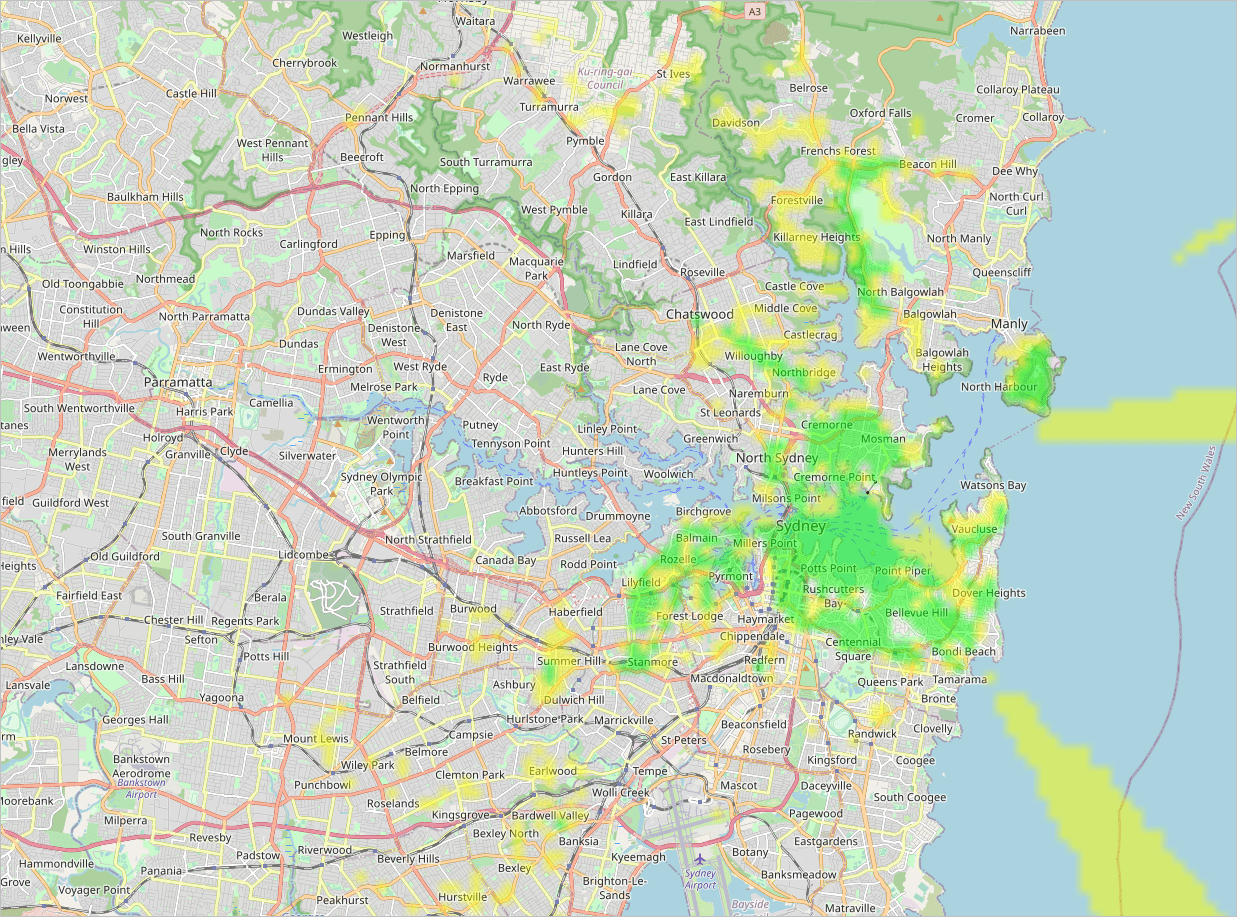 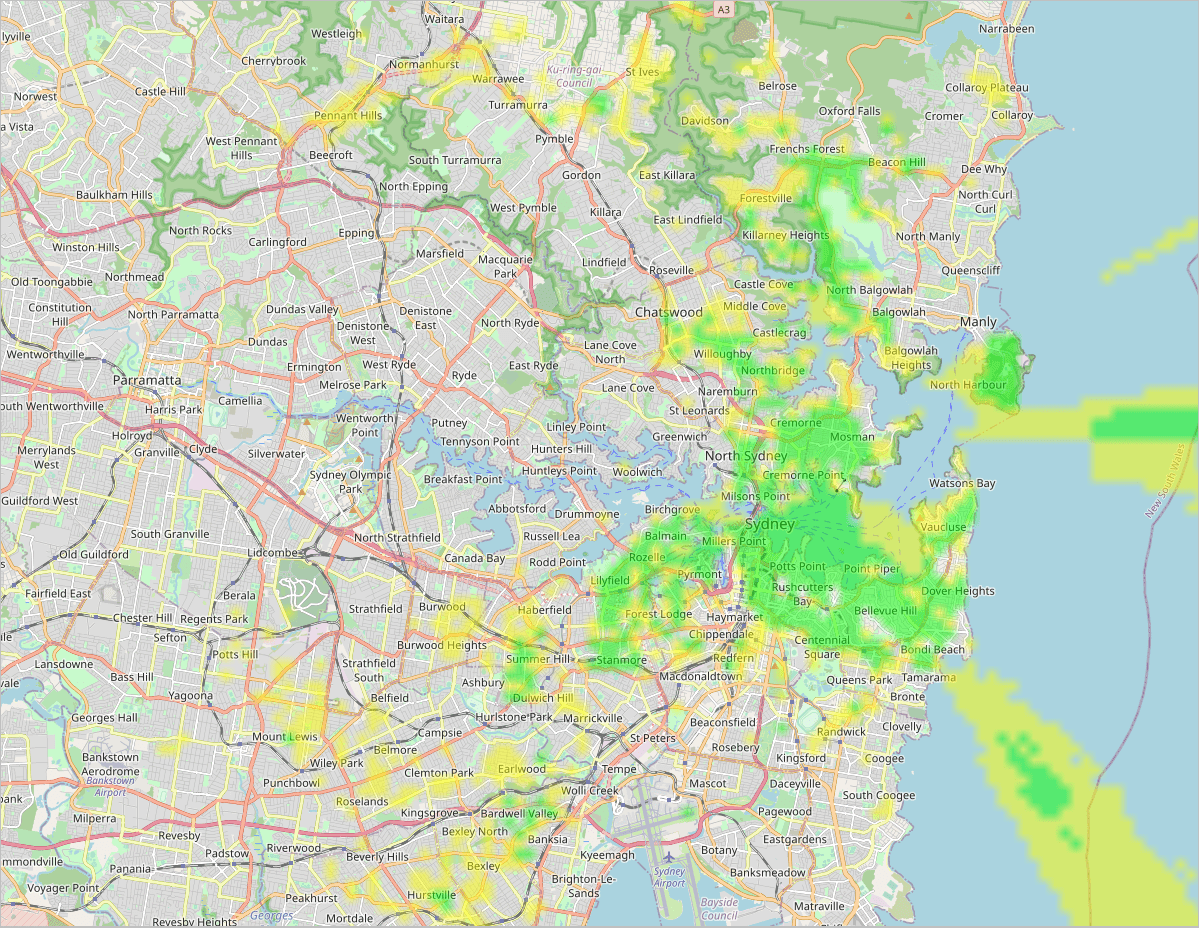 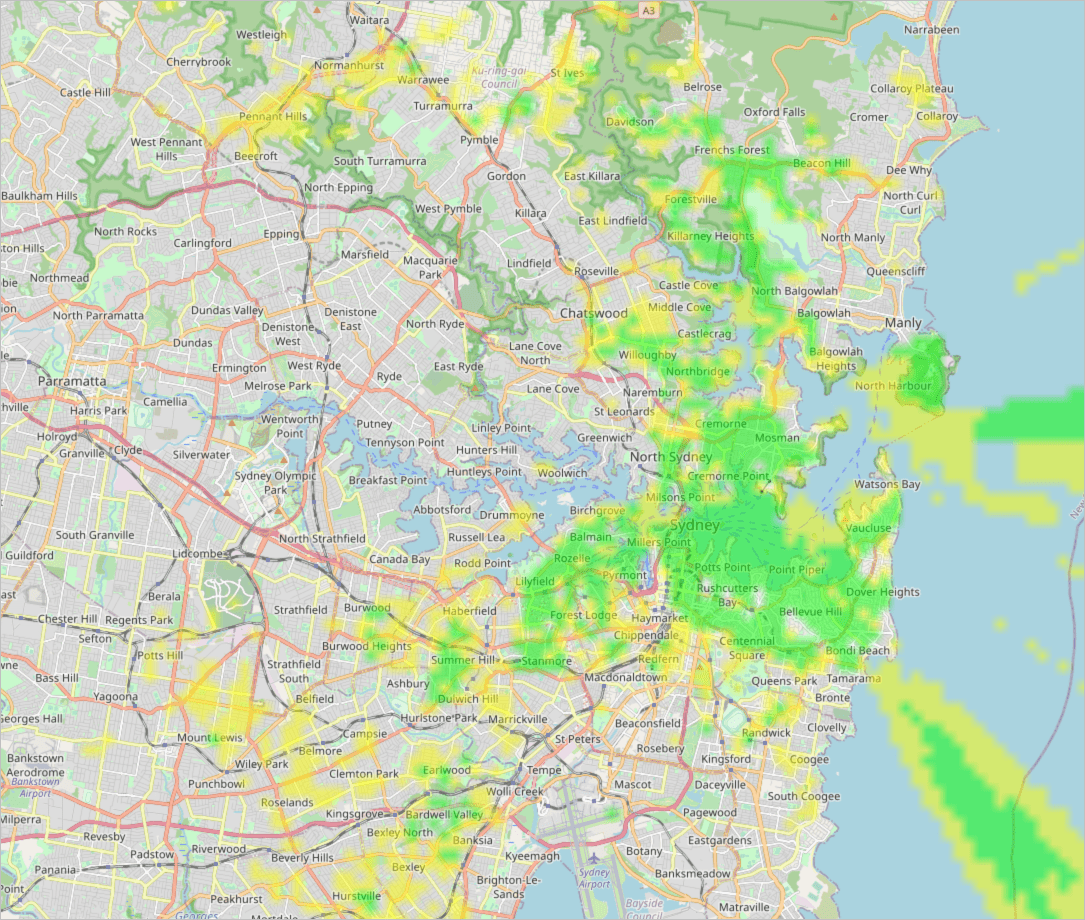 There are plans in the works to greatly increase this coverage, including for portable radios by mounting the gateway in a much higher position. This computer generated image shows the potential portable (1 watt) coverage if we’re able to mount the antenna for the gateway atop a building in the CBD. If you can help with this, get in touch via the Contact Me page!

To use the TETRA gateway, you must use a TETRA UHF radio that’s capable of transmitting and receiving on 439.250 in DMO mode.

If you need help with programming your TETRA radio, feel free to Contact me

The TETRA gateway is linked to the internet via SVXLink to a global network of Tetra Repeaters in other countries, and to Echolink. There are a number of talk groups available within the system.

By default, the gateway listens on TG 505 (Australia). If someone changes the talk group to something other than 505 and no audio is transmitted or received after 30 seconds the gateway will revert back to TG 505.

Additional talk groups are available. You can see the list of available talkgroups on the Talkgroups page

I’m using a Motorola MTM800e as the link radio. This radio is connected to a Raspberry Pi 3B running SVXLINK via a 3.3volt FTDI (RS232 to USB) cable for data and PTT control. The radio is also connected to a Signalink for send/receive audio to/from the Pi to send/receive audio to SVXLINK and then out to the broader internet network. The 20 pins at the rear of the MTM800e make it super simple to pull audio and data from the radio and send it to the Pi.

This radio is only capable of transmitting at up to 3 watts, and therefore is more suited to acting as a link radio, rather than attempting to use it to provide broader coverage locally here in Sydney.

The local gateway radio is a Sepura SRG3900. This radio is capable of transmitting at up to 10 watts, which provide ample coverage across the Sydney CBD and surrounds.

One of the slightly more challenging things with the SRG3900 is that there’s no real way of easily getting audio to/from the SRG3900 to the Pi (others have tried and failed), and thus the need for both radios.

I also run the reflector for all talk groups starting with 505. The reflector is a connection point for any other gateways on the system that wish to communicate on talk group 505. This currently runs on a linux server hosted in AWS.

If you’re using a 1/1.8 watt TETRA portable radio (such as an MTP800, MTH850, or any of the Sepura portables) to access the gateway, you may be able to hear it when someone else transmits, but you may not be able to transmit back and be heard by others on the system. This is because the transmit power of your radio isn’t enough to overcome the surrounding landscape/interference.

If you’re using a 3 or 10 watt TETRA mobile radio (such as a MTM800e, MTM5400, Sepura 3900 SRG), you may consider connecting an external RF amp to your radio to boost its transmit power if you can hear the gateway, but are unable to transmit to it.

You can also help extend the Tetra coverage here in Australia by building your own gateway!